My hope is that this book and/or movie might help someone find the strength and courage to face their own unique struggles. A family story for all ages with an ending that exemplifies life’s lessons. 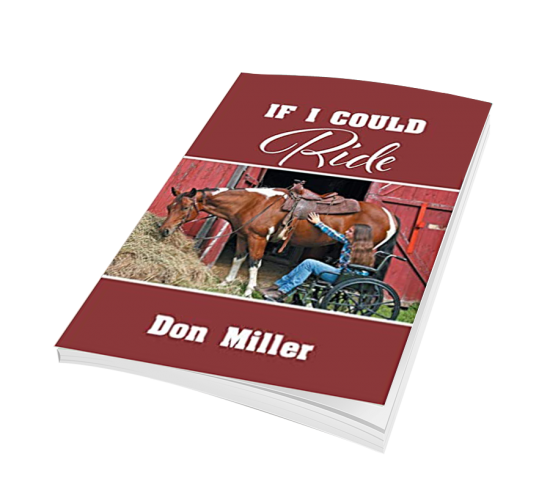 This journey began many years ago (1956- 1958) when I was a freshman/sophomore in high school being bullied. (I`ll come back to this part later).

I was married in 1966 to my wife of 54 years, Barbara. In 1968 we were excitedly expecting our first child. On August 8 of that year our child was born. However, during the birth, the umbilical cord became caught around the baby`s neck and he died. That was our first tragic setback in our life`s journey.

March 21 of 1970 our second child was born. A healthy baby boy we named Oliver “Rick” Miller, named after my father.

In 1975 came our second setback. We had a house fire and lost everything. My dog Duke woke me up and saved our lives.

March 21, 1982 tragedy struck us again. It was Ricky`s 12th birthday. My father flew him and my nephew to northern Vermont for a weekend snowmobile get away. My father was an airplane pilot all his life, logging thousands of hours. On the way home (March 21, Ricky`s birthday) they got trapped in a spring snow thunder storm and the plane crashed. My father was killed. Ricky and my nephew were both injured but survived. Words can`t express the devastation this brought to my life. However, it would get worse.

October 22, 2004 after a long battle with an injury Ricky received in a race car our son Ricky died. There can be no tragedy any worse than a parent losing a child.

For the next two years I wasn`t worth to much. Grief was consuming  me 24 hours a day and I was lost in my self pity. One day as I wallowed in my grief, my wife grabbed me by my shirt front (as a mother does to a child that is misbehaving) and shook her finger in my face. “Now you listen to me. I know you`re brokenhearted and overcome with grief. But, so am I and so are our two beautiful children. We have a responsibility to them now and for the rest of our lives. We`ve been dealt a cruel blow, but our lives cant stop. So, snap out of it and let`s take care of what we have left”. She was so right. I had been so lost in my grief that I left her and my kids to struggle on their own. A mother`s bond with a son must be one of the strongest things in this world and I had not been there for her or my kids.

A couple days after my “lecture” I was in my truck and an Elvis song came on “Are You Lonesome Tonight”. As I listened to it, I began to put my own words in the lyrics. Words of how I was feeling at that moment. When I got home, I wrote them down. I took the lyrics to a friend of mine who is a musician and asked him to put these lyrics to music. He did a great job and “I miss You Tonight” was now a song. I sent it to a friend of mine in Nashville and he produced it.

Knowing how many family`s have and love dogs, and also knowing the devastation of taking that dog on the last ride to the Vets, (I have done this 4 times in my life) I decided to write a song “The Last Ride”. One day my daughter sent me a link to a short film “If I Could Talk”.

The film reminded me so much of the song I just wrote. So, I got in touch with the producer of the film, Shawn Welling, and sent him the song. He loved it and suggested making a music video of it. He and his wife Michelle and their dog Ranger flew from Houston Texas to Vermont and we made the video. While he was here, he asked me if I would play a part in his sequel to “If I Could Talk” called “If I Could Bark”. I assured him that I had never acted and probably wouldn`t do to good. He said we would give it a try and we did. The next few days were so much fun. Ranger and I worked so well together and we got both films done.

That spring I flew to Houston, Tx and attended the Worldfest Film Festival for the world premier of the films. Another great experience and loads of fun. “The Last Ride” won a silver Remi and “If I Could Bark” won a gold Remi. We had so much fun and success with these productions. Shawn asked me if I could write another story and possibly make another film.

I flew back home, thinking about it on the long flight. And this is how, 60 years later the story “If I Could Run“ was born. When I was at the film festival I had the pleasure of meeting a up and coming young actress, Preslee Tucker. Shawn suggested her to play the lead in “If I Could Run”. So I changed the main character in the book to a young girl. The story reflected my experience of being bullied in high school.

That summer and fall Shawn and his team came to my small town and we produced the movie. We used students from the High School. My daughter and my son are in it as well as my niece. None of them had ever acted.

The next spring, I flew back to Houston to again attend the Worldfest Film Festival. There are films entered from all over the world. 4,500 films in different category`s were entered. Shockingly and amazingly “If I Could Run” won BEST FILM OF THE FESTIVAL!! It has gone on to win over 30 prestigious awards worldwide!

So, this is my story to this point. Bullying is such a disgusting, hurtful thing and it ruins lives! Now it is even worse with all the social media links. 60 years ago I could go home from school each day and be away from it. Weekends I was also safe from the hurt. However now it goes on 24 hours a day and there is no escape. It continues to destroys lives.

I make this site available to all and hope it may help someone realize that setbacks, tragedy`s, and even bullying can all be part of life`s journey. However, they can be overcome with understanding, help and perseverance.